Return on investment (ROI) is an important thing to consider when pursuing any marketing activity, and 360 photos and virtual tours are no different. Luckily, there has been a number of studies conducted by independent organizations and industry bodies to determine the effectiveness of the medium for businesses.  Here is our round-up of 360 findings! (If you’d like this document as a PDF – click here)

In 2015, Google commissioned an independent study of the effectiveness of virtual tours. This study found:

Those who view a listing with a virtual tour are twice as likely to be interested in booking a reservation there. And among 18-34 year-olds in particular, prospects are 130% more likely to book based on a tour.

Also found in the study was that among people surveyed, 67% want more businesses to have virtual tours. Of the remainder, 26% were indifferent, and 7% stated that more virtual tours were unnecessary. This means that people actively appreciate virtual tours when they land on company websites. 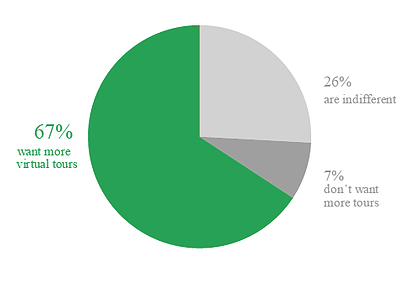 The National Association of Realtors is another group who has a vested interest in determining if virtual tours are helping or hurting their member’s businesses. Their annual reports are always great sources of research into the subject. Some recent findings include:

This finding backs up an additional finding from a Realtor.com study, that found listings with a virtual tour get 87% more views than those without virtual tours. In addition, Property Week found that virtual tours reduce the number of wasted viewings by 40% which means they are responsible for increasing the likelihood of visitors closing a sale while navigating on a given website.  Lastly, Planet Home’s ‘Trend Study’ concluded that 75% of potential customers and visitors consider a virtual tour to be a major decision-making tool before proceeding to a purchase. It’s clear that virtual tours are becoming a vital part of marketing both businesses and homes.

Outside of real estate, virtual tours and 360 content is thriving. Hotels are one such industry that has found great success by including them on their websites. According to research from TIG Global and Omni Hotels, a virtual tour on a hotel website increases bookings and look-to-book conversion rates by as much as 16 to 67%. That’s a massive increase in captured revenue from website traffic that would previously be gone to a competitor.

Other industries are also taking note of the success of 360 content. Social Bakers recently studied which industries are making the most use of 360 content. They found that outside of Real Estate, 63% of travel company pages posted at least one 360 videos or photo in 2016. The automotive industry wasn’t far behind with 54% of company pages publishing 360-degree posts. To put this in perspective, the fashion and beauty industry pages had the lowest adoption rate, as only 10% published at least one 360-degree post. Social Bakers also found that 360-degree photos were far more engaging on Facebook rather than typical photos.

Lastly, we’ll finish our roundup with a statistic from Panomatics cites that is relevant for all types of businesses:

360 photos and virtual tours are sources of deep engagement, especially when combined with hotspots and meaningful content.

We hope you’ll dive in and give 360 photos a try for your business! Remember, if you want this article as a PDF, download it here.

Customize Hotspot Icon Size, Rotation, and Position in Your 360 Photo
5 Things to Consider When Selecting A 360 Photo Platform For Your Business

This entry has 7 replies

Awesome resource for showing potential customers. Do you mind if I link to it from my website? Thanks

Keeping visitors on your page longer is one of the hardest things to do as a digital marketer. If you don’t have your own 360 gear it can be expensive to hire out, but the benefit of Google recognizing a page or pages on your website as having a lower bounce and better user experience IMO is well worth the expense for 360 photography. Great article thanks for summarizing the study!!!

Kudos to the author. This is such a great article. 360 photos and virtual tours might be the key ingredient to boost your customer experiences.

Thanks for this, brilliant article. Definitely had positive success with businesses in tourism where potential clients are from another city.

It’s awesome that 50% of the people found virtual tours helpful for making their decision when they’re looking at houses. I think that being able to see the house and virtually walk through it is a great idea. It saves time for almost everybody.

A report from Property Week stated that, in the real estate industry, using 360-degree virtual tours have reduced the number of wasted viewings by 40%. That’s a substantial amount of time and money saved!